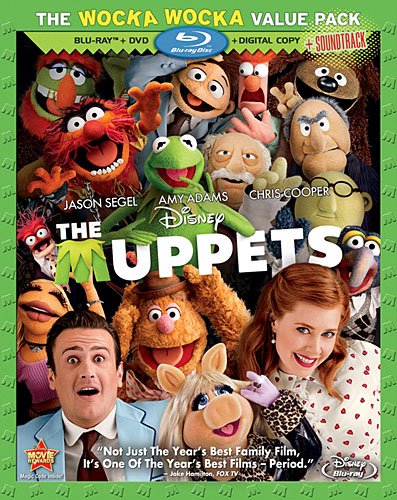 Muppet domination continues with a hilarious new movie from Walt Disney Studios. Jason Segel, Academy Award(R) nominee Amy Adams (Best Performance By An Actress In a Supporting Role, Junebug, Doubt, The Fighter) and Academy Award winner Chris Cooper (Best Performance By An Actor In A Supporting Role, Adaptation) join everyone's favorite Muppets and an all-star celebrity cast in a comic adventure for the whole family. While on vacation in Los Angeles, Walter, the world's biggest Muppet fan, his brother Gary, and friend Mary uncover the diabolical plot of a greedy oil millionaire to destroy the Muppet Theater. Now, the Muppet-loving trio must reunite Kermit, Miss Piggy, Fozzie Bear and their friends to stage the greatest Muppet telethon ever and save their beloved theater. The gang is back together again in a must-own movie full of irresistible music and family fun. Bring home the biggest Muppet adventure ever on Disney Blu-ray(TM) and DVD!

Movies attempting to retrieve cherished nuggets of pop culture often stumble, either by appealing solely to the die-hard minutia enthusiasts or clunking up the batter with unnecessary additions to the base material. (Enough with the human love triangles, get to the giant robots fighting.) Thankfully, this revival of Jim Henson's beloved characters gets the formula delightfully right, providing a googly-eyed nostalgia trip for adults while also retaining the original's sense of bright (and mildly subversive) wonder. All that's missing is a cameo from Shields and Yarnell, really. Kicking off with a boffo musical number, the story follows Walter (voice of Peter Linz), a small-town boy with a uniquely personal affection for the long-retired Muppets. (OK, he's made of felt.) Teaming up with his brother (Jason Segel, who also co-scripted) and the local schoolteacher (Amy Adams), they attempt to get Kermit, Fozzie, and the gang back together in order to save their studio from an evil oil baron (Chris Cooper, going all in). Director James Bobin (Flight of the Conchords) does a marvelous job of updating and honoring his material, weaving sly references to days gone by (the contents of Kermit's rolodex are a particular delight) into the mix of songs, celebrity cameos, and barn-broad puns that gave the original show its bubbly kick. (Fans of Animal and the Chickens will not go home disappointed.) Even the moments that don't quite work land with a cornball brio that feels wholly of a piece with Henson's universe. The result is a true family movie that still brings on the blissful, uncomplicated grins days after viewing. No matter what Statler and/or Waldorf might say, the show goes on. --Andrew Wright


Versions of The Muppets on Blu-ray and DVD